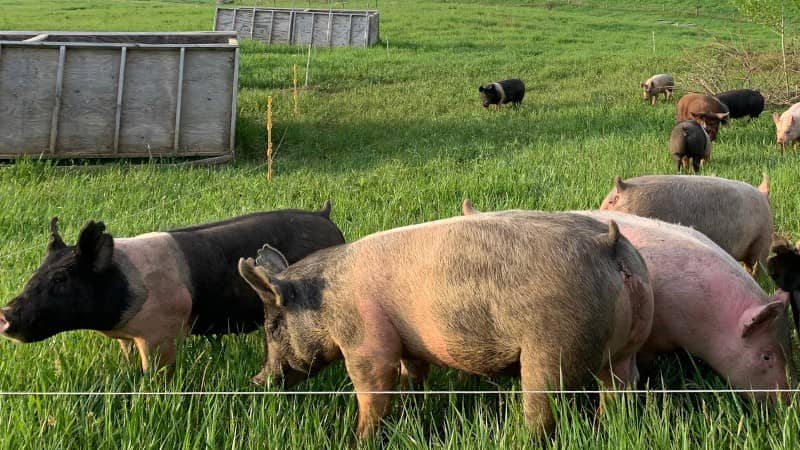 Wild pigs, also known as wild boars or Sus scrofa, are omnivorous animals that have a varied diet consisting of both plant and animal matter. They are known to forage for food in a variety of habitats, including forests, grasslands, and agricultural fields.

What Do Wild Pigs Eat?

Wild pigs are opportunistic feeders, meaning they will eat whatever food sources are available to them. Their diet can vary greatly depending on the season and location. Some of the common types of food that wild pigs consume include:

• Fruits: Wild pigs are known to eat a variety of fruits, including berries, apples, pears, and persimmons. They are also known to eat the roots and tubers of plants, such as yams and sweet potatoes.

• Vegetation: Wild pigs will consume a wide range of vegetation, including grasses, leaves, stems, and the shoots of young plants. They are known to dig up roots and tubers to eat, and they will also eat the bark and twigs of trees.

• Insects: Wild pigs will occasionally eat insects, such as grubs and beetles, as a source of protein.

• Small Animals: Wild pigs are known to prey on small animals, such as rodents, reptiles, and birds. They will also scavenge for carrion (dead animals) as a food source.

• Agricultural Crops: Wild pigs are known to cause damage to agricultural crops, such as corn, wheat, and soybeans. They will also eat the seeds of plants and the grains of cereals.

How Does Wild Pigs Forage For Food?

Wild pigs are highly adaptable animals that are able to forage for food in a variety of habitats. They have strong senses of smell and hearing, which they use to locate food sources. They are also skilled at digging and will use their snouts and tusks to root through the ground in search of food.

Wild pigs are social animals that typically forage in groups, known as sounders. The size of a sounder can vary, but it is usually composed of females and their young. Male pigs, known as boars, tend to live solitary lives and may only join a sounder during the breeding season.

What Are The Impacts Of Wild Pigs On The Environment?

While wild pigs are an important part of many ecosystems, they can also have negative impacts on the environment. The rooting behavior of wild pigs can cause damage to the soil and vegetation, leading to erosion and the destruction of habitats for other animals. Wild pigs are also known to compete with other animals for food and can transmit diseases to both wild and domestic animals.

In some areas, wild pigs are considered an invasive species, and efforts are taken to control their populations. This can include hunting, fencing, and the use of traps and baits.

wild pigs are omnivorous animals that have a varied diet consisting of both plant and animal matter. They are known to forage for food in a variety of habitats, including forests, grasslands, and agricultural fields. While they are an important part of many ecosystems, they can also have negative impacts on the environment and may be considered an invasive species in some areas.

Q1. What types of food do wild pigs typically eat?

Ans: Wild pigs, also known as wild boars, are omnivores and will eat a wide variety of foods including fruits, nuts, roots, insects, small mammals, and even garbage. They are also known to feed on agricultural crops such as corn, wheat, and soybeans.

Ans: No, wild pigs are omnivores, which means they eat both plants and animals. They will eat fruits, nuts, roots, insects, small mammals, and even garbage.

Q3. Can wild pigs survive on a diet of only roots and berries?

Ans: Wild pigs are omnivores, meaning they eat both plants and animals. While they may eat roots and berries, they also require a varied diet to survive. A diet of only roots and berries would not provide them with the necessary nutrients to survive.

Ans: Yes, wild pigs will eat fish when available. They will also eat other aquatic animals, such as crayfish and frogs.

Q5. Can wild pigs eat meat from other animals?

Ans: Yes, wild pigs are opportunistic feeders and will eat other animals, including small mammals, such as squirrels and rabbits, and even carrion (dead animals).