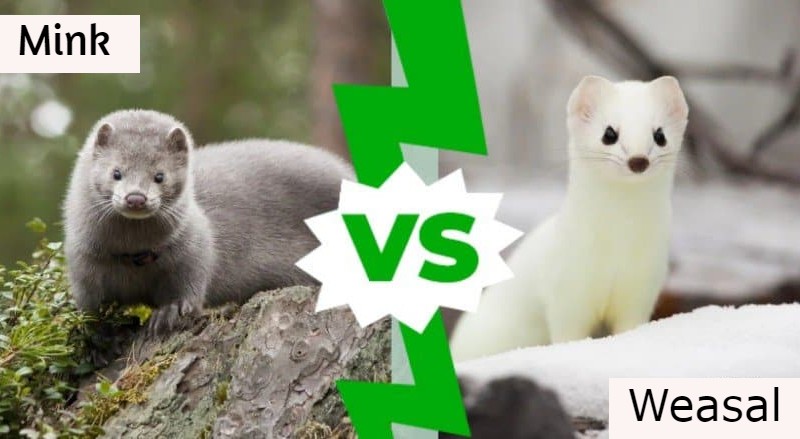 Weasels and minks are small carnivorous mammals that belong to the Mustelidae family, which also includes otters, ferrets, and badgers. Both animals are known for their sleek and slender bodies, sharp teeth, and strong hunting abilities. However, there are several key differences between weasels and minks that distinguish one from the other.

One of the most noticeable differences between weasels and minks is their size and appearance. Weasels are generally smaller, with a body length ranging from 6 to 12 inches (15 to 30 cm) and a tail length of 3 to 8 inches (7 to 20 cm). They have a slender and agile build, with long legs and a pointed snout. Weasels are also known for their long, thin bodies, which allow them to easily slip through small holes and crevices.

Minks, on the other hand, are larger, with a body length ranging from 14 to 24 inches (35 to 61 cm) and a tail length of 8 to 12 inches (20 to 30 cm). They have a more robust and muscular build, with short legs and a rounder snout. Minks are also distinguishable by their glossy, dark brown or black fur, which is prized for its softness and durability.

Another key difference between weasels and minks is their habitat and distribution. Weasels are found in a variety of habitats, including forests, grasslands, and agricultural areas. They are native to North America, Europe, and Asia, and are also found in South America and Australia as introduced species. Weasels are adaptable and can survive in a range of climates, from cold, snowy regions to warm tropical areas.

Minks, on the other hand, are mainly found in wetland areas, such as marshes, swamps, and riverbanks. They are native to North America and Europe and are also found in South America and Asia as introduced species. Minks prefer to live in areas with plenty of water, as they are semi-aquatic animals that are skilled swimmers and divers.

Weasels and minks also differ in their behavior and diet. Weasels are carnivorous and opportunistic hunters, meaning they will eat whatever prey is available to them. They are known to hunt small mammals, such as mice, rats, and rabbits, as well as birds, eggs, and insects. Weasels are solitary animals and tend to be more active at night, although they may also hunt during the day.

Minks, on the other hand, are mostly carnivorous, but they may also consume some plant material, such as berries and fruits. They are skilled hunters that prey on a variety of animals, including fish, amphibians, reptiles, and small mammals. Minks are more social than weasels and tend to live in small groups, known as colonies, which are led by a dominant male.

Weasels and minks also differ in their reproduction and lifespan. Weasels are known for their high reproductive rate, as they can produce several litters of young each year. They have a relatively short lifespan, with most individuals living for only a few years in the wild.

Minks, on the other hand, have a lower reproductive rate and tend to produce only one litter of young per year. They have a longer lifespan than weasels, with most individuals living for around 4 to 5 years in the wild.

Weasels and minks also have different relationships with humans. Weasels are sometimes considered pests due to their habit of preying on poultry and other domesticated animals. However, they are also valued for their role in controlling rodent populations. Weasels are not often kept as pets, but they can be trained to perform in circuses or other entertainment settings.

Minks, on the other hand, are mostly known for their fur, which is highly prized for its softness and durability. Minks are often raised on fur farms for their pelts, which are used in the production of clothing and other items. Minks are not typically kept as pets due to their high energy levels and territorial nature.

Weasels and minks are both small carnivorous mammals that belong to the Mustelidae family. While they have some similarities, there are also several key differences between the two animals, including their size and appearance, habitat and distribution, behavior and diet, reproduction and lifespan, and interactions with humans. Understanding these differences can help us appreciate the unique characteristics and roles of these two fascinating animals in the natural world.

Q1. What is the difference between a weasel and a mink?

Q2. Are weasels and minks similar in appearance?

Q3. What are the behaviors of weasels and minks?

Q4. How do weasels and minks differ in terms of diet?

Ans: Weasels are carnivorous animals that primarily eat small mammals, birds, and insects. Minks, on the other hand, are also carnivorous and eat a variety of prey such as fish, frogs, and crustaceans, in addition to small mammals and birds.

Q5. Can weasels and minks be kept as pets?

Ans: Weasels and minks are wild animals and not suitable to be kept as pets due to their aggressive and territorial behavior. Additionally, owning wild animals is illegal in many places and can be dangerous to both the animal and the owner, as they require a specific environment and diet that is difficult to provide in captivity. It’s also important to note that capturing and keeping wild animals as pets can have a negative impact on wild populations.