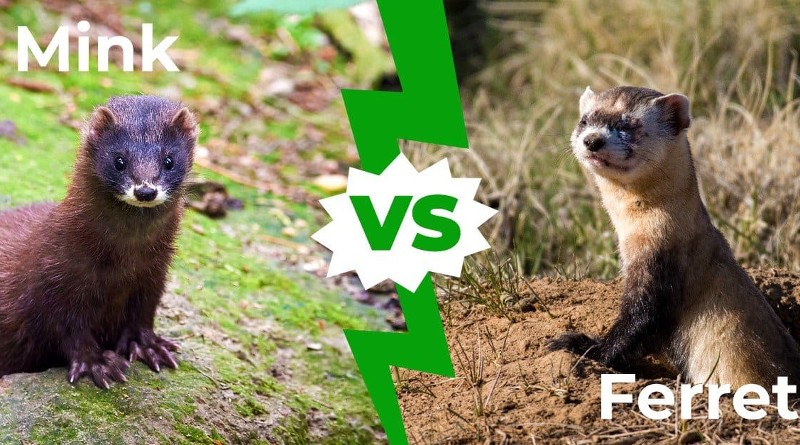 Mink and ferrets are both small, carnivorous mammals that are often kept as pets. However, there are several differences between the two animals that potential pet owners should be aware of before making a decision. In this article, we will compare mink and ferrets in terms of their appearance, behavior, diet, and suitability as pets.

Mink is a type of weasel that is native to North America and parts of Europe. They are known for their sleek, glossy coats, which are typically brown or black in color. Mink are smaller than ferrets, with a body length of about 20-26 inches and a weight of 1-2 pounds.

Ferrets, on the other hand, are a domesticated version of the European polecat. They have a longer, leaner body than mink, with a body length of around 20-30 inches and a weight of 1-4 pounds. Ferrets have a dense, soft coat that comes in a variety of colors, including black, white, and albino.

Mink are known for their strong prey drive and high energy levels. They are active animals that require plenty of space to run and explore. In the wild, mink are skilled swimmers and climbers, and they have a reputation for being fierce predators. Mink are also known for their territorial behavior, and they may become aggressive if they feel threatened.

Ferrets, on the other hand, are generally more docile and playful than mink. They are sociable animals that enjoy interacting with their owners and can be trained to do basic tricks. Ferrets are also known for their mischievous and curious nature, and they may get into trouble if left unsupervised.

Both mink and ferrets are carnivorous animals that require a high-protein diet. Mink should be fed a diet of fresh meat, such as chicken or fish, and may also benefit from the occasional addition of vegetables and fruits. Mink should not be fed processed or cooked meats, as these can be difficult for them to digest.

Ferrets, on the other hand, can be fed a diet of commercial ferret food or a combination of fresh meats and high-quality ferret kibble. Ferrets require a diet high in animal protein and fat, and they may also benefit from the occasional addition of vegetables and fruits. It is important to avoid feeding ferrets a diet that is high in carbohydrates, as this can lead to health problems.

Mink are not typically suitable as pets, as they can be difficult to care for and may exhibit aggressive behavior. Mink is also illegal to own as pets in some states.

Ferrets, on the other hand, can make good pets for people who are willing to invest time and effort into caring for them properly. Ferrets require a lot of attention and socialization, and they should be handled and played with regularly. They also have a lifespan of 5-8 years, so they are a long-term commitment.

Mink and ferrets are both small, carnivorous mammals that have their own unique characteristics and care requirements. While ferrets can make good pets for those who are willing to put in the time and effort to care for them properly, mink are generally not suitable as pets due to their aggressive behavior and legal restrictions on ownership. Potential pet owners should carefully consider their own lifestyle and resources before deciding which of these animals is right for them.

Q1. What is the difference between a mink and a ferret?

Q2. Are mink and ferrets similar in behavior?

Q3. What are the habitats of mink and ferrets?

Ans: Mink are found in a wide range of habitats, including forests, wetlands, and near bodies of water. They are excellent swimmers and are found near rivers, lakes, and coastal areas. Ferrets, on the other hand, are domesticated animals and are typically kept as pets in human households.

Q4. How do mink and ferrets differ in terms of diet?

Ans: Minks are carnivorous animals that primarily eat small mammals, birds, and fish. They are opportunistic hunters and will eat whatever prey is available. Ferrets, on the other hand, are also carnivorous, but they are typically fed a diet of commercial ferret food, or a combination of protein-rich food such as chicken or turkey, and vegetables.

Q5. Can mink and ferrets be kept as pets?

Ans: Minks are wild animals and are not suitable to be kept as pets due to their aggressive and territorial behavior. Ferrets, on the other hand, can be kept as pets and have been domesticated for over 2,500 years. They are known for their playful and curious nature and can be easily trained. However, it’s important to check the laws and regulations in your area as some places might not allow ferrets as pets, and owning a wild animal like mink is illegal in many places.